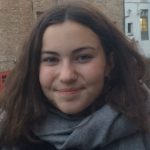 Most of us only know the standard way of teaching: adults instructing, young people listening. Before my voluntary year at the Anne Frank House in Amsterdam, I had never been part of a presentation or a workshop given by anyone my own age. But working here, I have seen how being taught by fellow learners can be much more effective and that students may even be more interested and receptive and considerate.

Let me share some examples of young people starting meaningful conversations with their peers and with parents using the Stories that Move online toolbox. 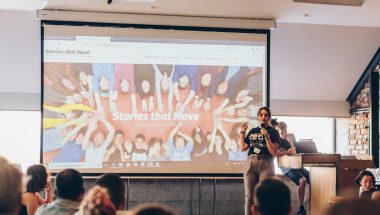 A member of the Anne Frank Youth Network presenting Stories that Move to other members at a conference in Berlin, summer 2018.

Emir and Nejla from Bosnia and Herzegovina, and Magdalena and Marta from Poland were introduced to Stories that Move at the Anne Frank Youth Network conference in the summer and took it back to show and use in their own schools: the Mustafa Novaliƒá gymnasium in Gradaƒçac and the ¬ÝSALWATOR private school in Krakow.

Using the tool, Emir and Nejla were impressed by the level of awareness their fellow students showed about the role discrimination plays in society. ‚ÄúAs much as it is unfortunate that levels of discrimination are growing in our society, I was happy to see that young people are able to see that,‚Äù said Emir. ‚ÄúI hope that Stories that Move helps them realise that there are people working to fight this.‚Äù

Magdalena and Marta used Stories that Move in their school to discuss ‚Äúwhat to do to combat stereotypes, discrimination and intolerance, and how to define and how to recognise them in everyday situations‚Äù. Both of them were very pleased with the outcomes. They found that their classmates came up with some very mature conclusions and they made interesting connections between 1938, the year of the November Pogroms (commonly known as the ‚ÄòNight of the Broken Glass‚Äô), and other periods in history.

Marta and Magdalena said: ‚ÄúWe must remember that twelve-year-old students have some very important things to say and ideas to share. They know the world far better than we think. Therefore, it is really significant to give young people a voice and an opportunity to express their own opinions, so they can later become responsible, critical, thinking citizens.‚Äù

For other examples of young people taking the lead, read about the students of the International School of Amsterdam getting parents to think by organising a workshop inspired by Stories that Move and read about Jure, a member of the Anne Frank Youth Network who held a workshop at a school in Slovenia.

Do you want to share your experiences too? Write to us at info@storiesthatmove.org