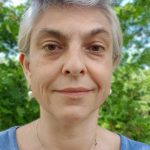 Meeting Stefan Kosiński is like meeting an old friend…

In May 2019 I joined a Stories that Move professional development seminar for teachers in Toruń, Poland, and was delighted to discover that my countryman Stefan Teofil Kosiński was one of the life stories featured in the online tool.

Kosiński – who was from Toruń – is the only documented Polish victim of Nazi persecution under Germany’s paragraph 175 anti-gay laws. I am a Polish teacher-librarian with a post-graduate degree in Totalitarianism,  Nazism and the  Holocaust, Gender Studies and Knowledge about Culture. I had learned of Kosiński’s story when I was working with records collected by the USC Shoah Foundation during a teachers’ seminar at the POLIN Museum of the History of Polish Jews in Warsaw. The discovery led me to create a lesson plan based on a popular song for children –  “Kto w Toruniu mieszka…” (Who lives in Toruń…), which I used at the technical school where I work. I also joined forces with the Stowarzyszenie Inicjatyw Niemożliwych Motyka from Toruń, an organisation that promotes dialogue based on tolerance and equality, to put together a city-based game aimed at popularising Kosiński’s life story.

Since then, local Pride organisers and one of the actors from Toruń’s Teatr Wilama Horzycy – Tomasz Mycan – have adapted Lutz van Dijk’s book about Kosiński, Damned Strong Love, into a play. Kosiński’s living relatives were invited to the first performance and there is talk of it becoming part of the theatre’s regular programme. 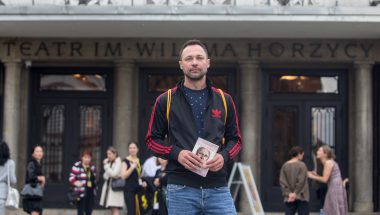 Actor Tomasz Mycan was the author of the theatrical adaptation, in which he played Kosiński’s lover – Willi G.

Another positive initiative in Toruń is being coordinated by the LGBT+ rights organisation Pracownia Różnorodności Stowarzyszenie Na Rzecz Osób LGBT. They preserve Kosiński’s story by finding and highlighting traces of it around the city; they also helped find Kosiński’s grave.

In all, I am very happy that Kosiński’s story has been put back on Toruń’s social map.

Unfortunately, antidiscrimination classes in Polish schools, especially ones that focus on LGBT+ issues, are very often blocked; any that do take place are usually viewed rather negatively by the teachers, headmasters and the students. I have experienced such attitudes towards my own projects. I find it especially upsetting, knowing that the lack of tolerance leads to frequent acts of peer discrimination and even suicides.

I believe, however, that thanks to Stories that Move and through youth-orientated work based on stories like Kosiński’s, a young guy who walked the same streets as today’s young people, we will be able to raise the awareness of a younger generation.